American Gold Eagles
A variety of dates are available, including the current year - we also offer Gold Eagles in all denominations 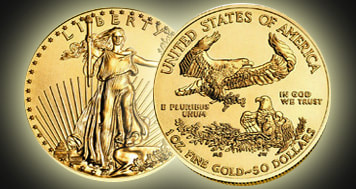 The American Gold Eagle is an official gold bullion coin of the United States. Authorized under the Gold Bullion Coin Act of 1985, they were first released by the United States Mint in 1986. These coins are guaranteed by the U.S. government to contain the stated amount of actual gold weight in troy ounces. By law, the gold must come from sources in America, alloyed with silver and copper to produce a more wear-resistant coin.

The obverse design features a rendition of Augustus Saint-Gaudens' full length figure of Lady Liberty with flowing hair, holding a torch in her right hand and an olive branch in her left, with the Capitol building in the left background. The reverse design, by sculptor Miley Busiek, features a male eagle carrying an olive branch flying above a nest containing a female eagle and her hatchlings. The design is taken from the $20 Saint-Gaudens gold coins that were in circulation in the 19th and early 20th century. 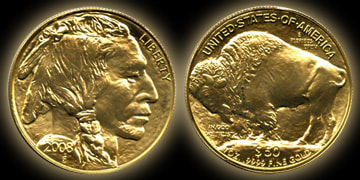 American Buffalo gold bullion: coins are the first .9999 fine 24-karat gold coins ever struck by the United States Mint. The coin was created in order to compete with foreign 24-karat gold bullion coins, which some investors and collectors prefer over the American Gold Eagle, which is 91.67% pure. These coins have a $50 face value and are legal tender coins. Production of the American Buffalo Gold Coins was authorized by Public Law 109-145, dated December 22, 2005, known as the Presidential $1 Coin Act. The U.S. Mint first minted the coins in 2006.

The coin follows the greatly admired design of the Indian Head nickel, which was designed by American sculptor James Earle Fraser and is regarded as among the best designs of any U.S. coins.
$20 Gold "Double Eagles"
A viable alternative for those who are interested in collector or numismatic value in addition to bullion value are original $20 gold double eagles. A "double eagle" is a gold coin with a denomination of $20. The composition of these coins is 90% gold and 10% copper. We offer these coins in both circulated (raw) condition and in uncirculated condition (slab) that are graded by professional services such as PCGS (Professional Coin Grading Service) and NGC (Numismatic Guaranty Corporation).
Silver Eagles 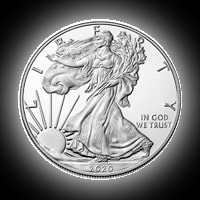 We just received a large quantity of silver shots, small pieces of pure silver often used in creating and enhancing jewelry. Three container sizes of the pure silver are available:
1 ounce
3 ounce
6 ounces
Prices will be based on the price of silver bullion at the time of sale.
Silver Rounds and Bars
We offer a variety of .999 silver bars and rounds made by private mints, such as 1-ounce rounds, 1-ounce bars, 10-ounce bars, 100-ounce bars, and 1,000-ounce bars. Call for availability and pricing.
90% Silver 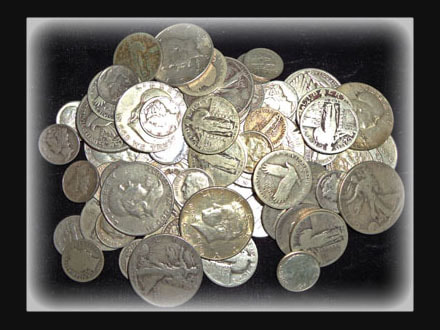 One of the most popular ways to invest in silver bullion is with the 90% U.S. Silver Coins. Commonly referred to as junk silver, this name developed in the 1970s and was used to describe a bag of average circulated silver coins, meaning no rare coins were included. Such coins are popular among people seeking to invest in silver, particularly in small amounts. Today, a 90 percent silver composition is only used in commemorative coins or silver proof sets intended for coin collectors. Those who are interested in purchasing 90 percent junk silver focus on the dimes, quarters, and halves minted for circulation before 1965.

Junk-silver coins may be a desirable method of investing in silver for several reasons:Call for availability and prices.
Platinum Eagles 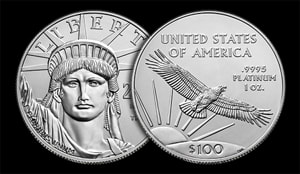 The American Platinum Eagle was first released by the U.S. Mint in 1997. It is offered in 1/10 ($10 face value), 1/4 ($25 face value), 1/2 ($50 face value)and 1ounce ($100 face value) varieties and consists of 99.95% platinum. The coins are legal tender for all debts public and private at their face value. Designed by John Mercanti, the obverse features Liberty looking to the future and the reverse features an eagle soaring above America. Proof and uncirculated versions of the coins are minted. The proof American Platinum Eagles are unique in the fact that they are the only U.S. bullion coins that have a yearly alternating design on the reverse.
Call for availability and prices.