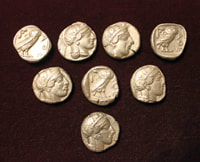 These beautiful tetradrachm coins were minted between 440-404 B.C. The obverse features the ancient Greek goddess Athena, often associated with wisdom, handicraft, and warfare. Athena was regarded as the patron and protectress of various cities across Greece, particularly the city of Athens, from which she most likely received her name.  Her major symbols include owls, olive trees, snakes, and gorgoneion (an amulet used by Athena as a protective pendant).

The reverse features one of Athena's symbols, an owl, along with olive spray and the moon. Each coin is certified authentic by Numismatic Guaranty Corporation and are in Choice AU condition.
Click on the image to see a larger representation of each coin.
New! Byzantine Reliquary Crosses - 800-1200 A.D. - $250.00 each 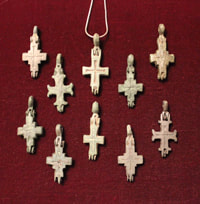 Each cross is made of two crosses hinged at the bottom, which allowed access to a hollow space meant to hold a relic. The large numbers of surviving copper-alloy reliquary crosses suggest that they were not used solely for relics of the True Cross or other primary relics, such as the bone of a saint. Instead, they likely contained secondary relics, for instance, a piece of earth from a holy site or a piece of fabric made holy throught contact with the body of a saint.

Click on the image to see a larger representation of each cross.
Ancient Roman Nail and Widow's Mite Set - $55.00 each 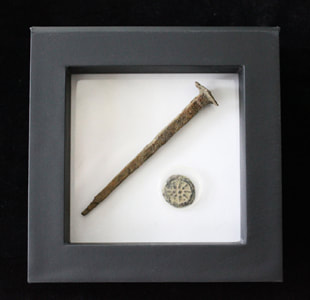 These nails were created and used by the Roman Empire within 50 years of the crucifixion of Jesus Christ. They were discovered in 1960 and were part of a Roman fortress in Northern Scotland. After the Romans stripped the fortress in 87 AD, they buried the nails so that their enemies could not find them and use them to make swords.

The Pruta or "Widow’s Mite" was the smallest of the bronze coins in Jewish currency. These coins are referred to in the New Testament in Mark 12:41-44, “And He sat down over against the treasury, and beheld how the multitude cast money into the treasury; and many that were rich cast in much. And there came a poor widow, and she cast in two mites, which make a farthing. And he called unto him his disciples, and said unto them, Verily I say unto you, This poor widow cast in more than all they are casting into the treasury: for they did cast in of their superfluity; but she of her want did cast in all that she had, even all her living.”

The coins were issued during the reign of Alexander Jannaeus (Jannai/Yannai)the second Hasmonean king of Judaea from 103 to 76 BC. A son of John Hyrcanus, he inherited the throne from his brother Aristobulus I, and married his brother's widow, Queen Salome Alexandra. From his conquests to expand the kingdom to a bloody civil war, Alexander's reign has been generalized as cruel and oppressive with never ending conflict. The set comes with a certificate of authenticity in an attractive display case and will be a beautiful addition to your historical collection!
Silver Shekel, Phoenicia, Tyre - NGC Certified Choice AU - SOLD

Tyre was a large port city in Phoenicia (now Lebanon) and was among the first cities to strike its own coinage after freedom from Seleucid domination.  The city was the center of worship for the god Melkart (meaning “king of the city”), which is featured on the obverse of this coin. To the Greeks and Romans, who identified Melkart with Hercules, he was often known as the Tyrian Hercules. The laurel on his head reflects his role in the Tyrian games. The reverse features an eagle standing on a ship’s prow with a palm branch in the background. Next to the eagle is an upright club (symbolic of Tyre). Between the eagle’s legs are an alef or a bet, the first two letters of the Phoenician alphabet, for an uncertain administrative function. The legend in Greek reads, “Of Tyre, the holy and city of refuge.” Also on the reverse is a date rendered in a formula of Greek letters that specified the number of years that had passed since Tyre’s independence in 125 BC.

The shekel was the medium of payment for the temple tax, which was paid by the Israelites and Levites toward the upkeep of the Jewish temple in Jerusalem. Since Roman coins were only 80 percent silver, the purer (94 percent or more) Tyrian shekels were required to pay the temple tax. Every man over 20 was required to pay ½ shekel as a tribute for the temple tax. After the Roman empire closed the mint in Tyre, authorities allowed the Jewish rabbanim to continue minting the shekels in Judea, with the requirement that the coins continue to bear the same image and text, avoiding objections that the Jews were given autonomy. The Tyrian shekel is mentioned in the New Testament: in Matthew 17:24-27, when the temple tax collectors asked Peter if he and his Master had paid the temple tax, and Jesus instructed Peter to find money for tribute in a fish's mouth; and in Matthew 26:14-15, when Judas betrayed Jesus for 30 pieces of silver (most likely Tyrian shekels from the temple treasury).

The coin was probably minted around 89/90 BC and is certified authentic by the Numismatic Guaranty Corporation (NGC) in Choice AU condition. Click on the image to see a larger representation of the coin. 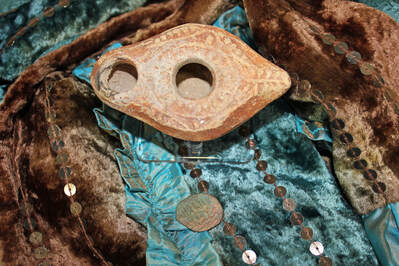 We have a wide variety of beautiful terra cotta oil lamps from the Holy Land, circa 100-400 AD. With the purchase of an oil lamp, you will also receive an ancient coin for free.
Byzantine Bronze Christ Portrait Coins - 800-1200 AD - $49.00 each 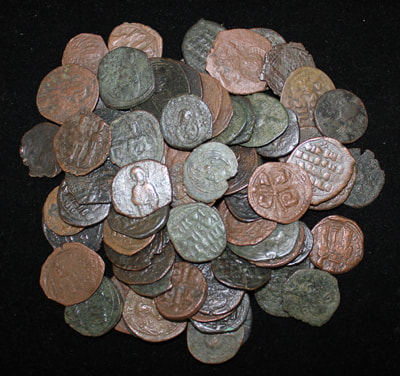 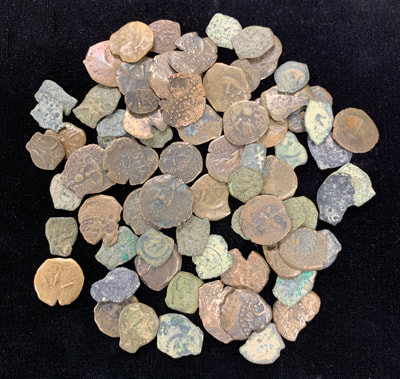 The Pruta or "Widow’s Mite" was the smallest of the bronze
coins in Jewish currency. These coins are referred to in the
New Testament in Mark 12:41-44.