The Canadian Gold Maple Leaf coin was introduced in 1979 and produced by the Royal Canadian Mint. From 1979 to 1982 the coins were minted with a gold content of .999; since then their content is .9999 pure, one of the purest gold bullion coins worldwide. The coins are legal tender of Canada, the most popular being the 1-ounce (50 Canadian dollars). Other sizes and denominations in 2015 include 1 gram, 1/20 ounce (1 dollar), 1/10 ounce (5 dollars), 1/4 ounce (10 dollars), and 1/2 ounce, (20 dollars). The Gold Maple Leaf's obverse features Queen Elizabeth II and reverse displays the Canadian Maple Leaf. In 2015, new security features were introduced with radial lines and a micro-engraved laser mark. We offer one ounce and fractional sizes. Call for availability and pricing.
2021 One-Ounce Silver Maple Leafs 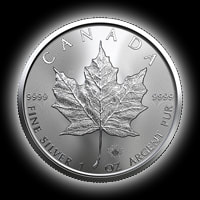 One ounce Silver Maple Leaf coins have been produced by the Royal Canadian Mint since 1988 and are .9999 pure silver. At 5 Canadian dollars, it has the highest face value among international silver bullion coins. The coin has special security features including radial lines and a micro-engraved laser mark. The small privy maple leaf is also a security feature, including the number to signify the year of issue, micro-engraved into the surface. This security feature will only be visible under magnification.

The obverse features the 4th generation portrait of Queen Elizabeth II, first created in 2003 by Susanna Blunt. This design is the first of the queen without a crown and the first to do so since the reign of her father, King George Vi. The reverse features the sugar maple leaf, modern symbol of Canada. The maple leaf has been a symbol of cities and territories in Canada since the 17th century. The maple leaf design was first created in 1979 by Walter Ott for the debut of the gold Canadian Maple Leaf coin. We offer  1-ounce Silver CMLs individually and in rolls of 25. Call for availability and pricing.
Platinum Maple Leafs 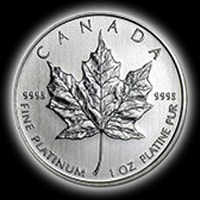 Introduced in 1988, all Platinum Maple Leaf coins have legal tender status in Canada for their face value. Since 1988, the coins have been recognized around the world for their purity of .9995 fineness. Each platinum Maple Leaf coin prominently features Canada's national symbol, the maple leaf, and an image of Queen Elizabeth II. It is struck in pure .9995 fine platinum and carries a face value of 50 Canadian dollars. Each coin is manufactured to meet the high quality standards of the Royal Canadian Mint, and the weight, purity and face value of each coin are guaranteed by the Canadian government. Call for availability and pricing. 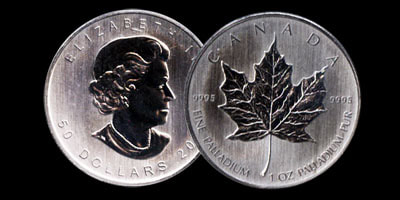 First minted in 2005 by the Royal Canadian Mint, the 1-ounce Palladium Maple Leaf is the world's first regularly issued palladium coin. Made of .9995 fine palladium, it carries a legal tender value of 50 dollars.  Palladium is much rarer than platinum and also carries a higher risk. Call for availability and pricing.