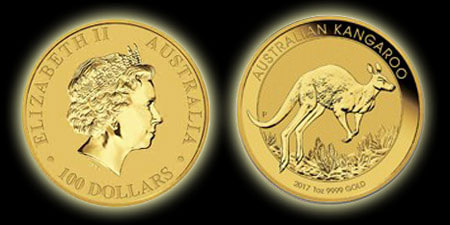 The Gold Australian Kangaroo coin series, minted by the Perth Mint, continues to be a popular coin for collectors. The series began in 1987 and currently features the most recognizable symbol of Australia—the kangaroo. Each coin contains .9999 fine gold and is one of the few legal tender coins that changes design every year.
The coins are available in a variety of sizes, from 1/20 ounce to a kilo; however, we recommend the 1 ounce variety.  Call for availability and pricing.
New! 2020 One-Ounce Silver Dragon Rectangular Bar

The Perth Mint has introduced the third release in its rectangular bullion coin series with the 2020 Australian One-Ounce Silver Dragon Bar. The bars are .9999 pure silver and are actually legal tender, backed by the Australian government, with a face value of $1 (Australian dollar). The obverse features the Jody Clark portrait of Her Majesty, Queen Elizabeth II, wearing the Royal Diadem crown, along with the coin's weight, fineness, denomination and 2020 year date. The reverse features features a pair of Chinese dragons chasing the flaming Pearl of Wisdom, along with the Perth Mint's "P" mintmark. The dragon is an extremely important figure in Chinese culture, appearing not only in multiple forms of symbolism but also frequently in ceremonies and celebrations.

Call for availability and pricing.
2020 One-Ounce Silver "Year of the Mouse" Coins

This one-ounce silver coin from the Perth Mint is the first of the Australian Lunar Series III. Celebrating the 2020 Year of the Mouse, these coins are .9999 fine silver. They are the only coins in this series with a mintage cap of 300,000 coins. The reverse, designed by Ing Ing Jong, features two mice enjoying their meal on two cornstalks. The reverse also includes a micro-engraved security feature. The obverse, created by Jody Clark, is a portrait of Queen Elizabeth II wearing the Royal Diadem crown. This is the sixth-generation portrait of Her Majesty, which was featured on Australian coins beginning in 2019.
2020 One-Ounce 30th Anniversary Kookaburra Silver 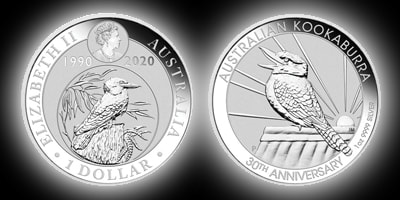 Australia celebrates the 30th anniversary of the one-ounce silver Kookaburra coins with a commemorative design for 2020.  The obverse features the Stuart Devlin design of a kookaburra on a tree stump surrounded by native foliage, which was the same design on the 1990 Australian Kookaburra silver bullion coin. The obverse also features the Jody Clark portrait of Her Majesty, Queen Elizabeth II, along with the inscription "1990-2020" and the monetary denomination.

The reverse features the kookaburra perched on a roof at dawn surrounded by rays of light in the background. Also included is the inscription, "30th Anniversary," along with the Perth Mint "P" mint mark, the weight and purity. Due to the yearly design change and limited production, the one-ounce silver Kookaburras have higher collectible value than some other bullion coins. These coins have a mintage of 500,000. Call for availability and pricing.
2020 One-Ounce Silver Koala Coins

Produced by the Perth Mint, the Silver Koala was first released in 2007, is struck in .9999 fine silver, and is a legal tender coin with a face value of 1 Australian dollar. The obverse features the Jody Clark design of Queen Elizabeth II; and the reverse features the popular marsupial, the koala, sitting atop a branch of a eucalyptus tree. Like the Kookaburra coin, the reverse design of the Silver Koala changes every year, appealing to collectors worldwide. Call for availability and pricing.