The newspaper was first published in 1728 by Samuel Keimer. It was the second newspaper to be published in Pennsylvania under the name The Universal Instructor in all Arts and Sciences: and Pennsylvania Gazette. Keimer’s intention was to print out a page of Ephraim Chambers’ Cyclopaedia in each copy. Benjamin Franklin and Hugh Meredith bought the paper in 1729 and shortened its name and dropped plans to print out pages of the Cyclopaedia. Franklin not only printed the paper but also often contributed pieces to the paper under various aliases. His newspaper soon became the most successful in the colonies.

The publication featured classified ads, employment notices, items for sale, travel stories along with reprints of foreign news. The newspaper ceased publication in 1800, ten years after Franklin’s death. This particular issue is from 1740, 35 years before the start of the Revolutionary War! Click on the image to see a larger representation of the gazette.
State of Louisiana Bonds
State of Louisiana Reconstruction Bond 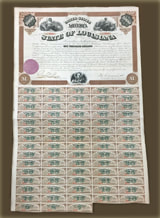 A beautiful $1,000 bond printed by the National Banknote Company and issued to the New Orleans, Mobile, and Chattanooga Rail Road Company or Bearer. Measuring approximately 16 3/4 inches wide by 26 inches long, the bond has an ornate brown border around it with vignettes of Agriculture and Commerce at the top.

At the bottom of the bond is a vignette of the state bird, a brown pelican, with her four nestlings, and the words "I live and die for those I love". The mother, with drops of blood on her breast, has wounded herself to feed her own blood to her young. The bond is signed by impeached Governor Henry Clay Warmoth and Secretary of State George E. Bovee. Below the bond were 79 coupons, in green and brown with the bond number 2188 in red, each paying semi-annual interest of $40 interest when redeemed. Six coupons had previously been clipped and redeemed.Giori Test Note Single with vignettes of Presidents Abraham Lincoln, George Washington, and Ulysses S. Grant. Opposite side of note is blank. Click on the image to see a larger representation of the bond.
New! Dewey Defeats Truman Newspaper dated November 3, 1948 - $2,995.00 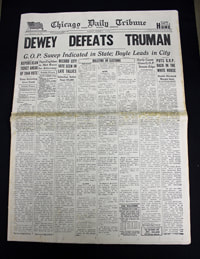 There was no love lost between the Republican-leaning Chicago Daily Tribune (later changed to the Chicago Tribune) and Democratic presidential candidate Harry Truman, so when the newspaper reported that Dewey won, Truman was jubilant as he held up a copy of the erroneous headlines in a famous photograph of his triumph.

Prior to the 1948 election, printers who operated linotype machines at Chicago newspapers had been on strike, protesting the Taft-Hartley Act. About the same time, the Tribune had switched to copying the paper that was composed on typewriters, photographed and then engraved on printing plates. With this process, the paper had to go to press several hours earlier than usual.

On election night, the first edition had to go to press even before poll results from the East Coast were available. The paper relied on Arthur Sears Henning, its veteran Washington political analyst and correspondent who had picked the presidential winner over the last 20 years, along with public opinion polls and conventional wisdom that Dewey was sure to be the winner. So the first edition of the Tribune led with the headline “Dewey defeats Truman.”

It was not only a victory for Truman but also for the Democrats, who took control of both the House of Representatives and the Senate. Click on the image to see a larger representation of the newspaper.