This is a 2 Escudo Gold Cob coin produced during the reign of King Philip II of Spain. The first mass production of machine-made coins dates around 1660. Prior to that, coins such as these were struck by hand on rough hand-made planchets known as "cobs"; therefore, each coin is unique. The coins were struck under the rule of Spanish King Felipe (Philip) II, who ruled from 1556 to 1598 and built a large empire. At the time Spain was considered to be in the golden age because of its high influence and power over its colonies. Spain was known as the "Empire on which the sun never sets" because of the immense area that King Felipe's empire covered. The obverse of the coin features a crowned shield in center. The reverse shows a Jerusalem cross inside four lobes around each corner of the cross. Click on the picture to see a larger representation of the gold cob.
New Price! Spanish 8 Reals or Spanish Dollars - $165.00 each 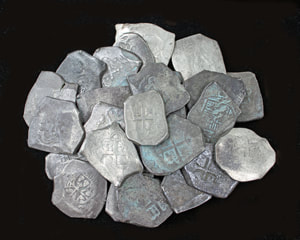 There are two major denominations of Spanish colonials: reales for silver coins and escudos for gold coins. Many of us are familiar with stories of pirate treasure of gold doubloons and pieces of eight. The escudos are the gold doubloons, and the reales are the silver pieces. The Real de a Ocho, also known as the Spanish dollar, the Eight Royals Coin, or the Piece of Eight, is a silver coin of approximately 38 mm diameter that was minted in the Spanish Empire after 1598. Its purpose was to correspond to the German thaler.

The Spanish dollar coin was worth eight reales and could be physically cut into eight pieces, or "bits," to make change — hence the colloquial name "pieces of eight."  It became the first world currency by the late 18th century because of its wide use in Europe, the Americas, and the Far East. The American dollar used today was based on the Spanish dollar, and remained legal tender in the United States until the Coinage Act of 1857. Though they have been out of use for over one hundred years, pieces of eight have a lasting legacy. Terminology related to them was used to refer to certain portions of a dollar in the United States even in the 20th century; for example, a quarter was known as  "two bits,"  and 50 and 75 cents were "four bits" and "six bits" respectively. The New York Stock Exchange listed stock prices in one-eighths of a dollar until 1997.

The coins above were minted in the early 1700s and feature a crowned shield with the Spanish coat of arms one one side with the Jerusalem cross on the other.