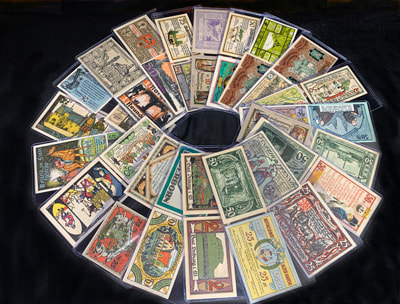 During and after the First World War, money, especially small change, was in short supply. Metal was being used in the war efforts, and people's natural tendency to hold onto something of value, such as coins and banknotes, furthered the shortage. To alleviate this problem, the state bank (Reichbank) appears to have agreed to allow towns, villages, and municipalities to issue their own money. These issues were emergency issues; hence, the name notgeld--not meaning emergency or necessity and geld meaning money.
We have a wide variety of these old banknotes, with their different colorful motives and designs, and they are sure to be a hit for those who love old currency. Click on the image to see a larger representation of the currency.
Sold in two-note sheets
2 notes (one sleeve) -  $3.00
4 notes (two sleeves)- $5.00
Broken Bank Notes
After the failure of the First and Second Banks of the United States in 1836, no paper money was issued by the U.S. Government. Lax state and federal banking laws allowed almost anyone to issue currency—private banks, railroads, municipalities, merchants, and individuals, and this became known as the Free Banking Era. Many of the banks, without federal regulation, failed or went broke, hence the name “Broken Bank Notes.”  The era ended in 1863 with the passage of the National Bank Act.

Below is an assortment of Broken Bank Notes from various states. Click on each image to see a larger representation of each note. 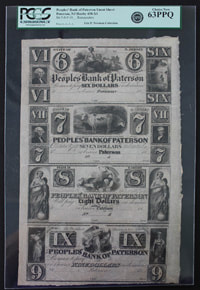 A beautiful uncut sheet of New Jersey Notes, $6, $7, $8, and $9, issued by the Peoples' Bank of Paterson.
A part of the Eric P. Newman Collection, the sheet has been sealed and graded by PCGS
(Professional Coin Grading Service) as Choice New 63PPQ (Uncirculated Premium Paper Quality). These
rare and desirable odd denominations are highly prized by collectors.

Click on the image to view a larger represenation of the note.

Louisiana Currency and Notes (click on each image to view a larger representation of each note)
Louisiana Baby Bonds - $19.95 each

These $5 bonds were issued by the state of Louisiana during the turbulent period following the Civil War.They were called “Baby Bonds” because of the image of the baby on each bond and due to its small denomination, which allowed individuals to purchase them and help the state during Reconstruction.  After the Civil War, the federal government imposed a large tax on currency issued by the states. To avoid the tax, the state of Louisiana issued small bank notes disguised as interest-bearing bonds, thus avoiding the tax. They were used throughout the state since they were worth the same as the federal currency.

The notes have the signature of Louisiana Governor Louis W. Weltz, who was elected governor in 1880 but died of tuberculosis one year later. They are also signed by Louisiana treasurer E. A. Burke, a Democrat and “Carpetbagger” who caused quite a scandal when he stole over almost $2 million from the state during his ten years in office. In the late 19th century, numerous bonds issued in the 1860s and 1870s by Louisiana were surrendered to the state in the 1880s to be cancelled in exchange for newly issued bonds. Burke issued the new bonds but never cancelled the old bonds. Instead he resold them in the open market and pocketed the money for himself. He was indicted while he was in London, did not return to the U.S. and found a safe haven in Honduras, where he remained until his death in 1928. Click on the image to see a larger representation of the bond.
Citizens' Bank of Louisiana Uncut Currency Sheet 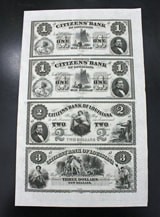 Prior to the outbreak of the Civil War, the Federal government had issued currency only on a sporadic basis (generally during a crisis), choosing instead to rely on specie (gold and silver) to circulate as a median of exchange. Local institutions, to help alleviate periodic shortages of specie and to facilitate commerce, issued various types of paper money to be redeemed for coins at a later date. The success of these issues varied, with some institutions redeeming the majority of their currency, while some closed their doors and left their customers holding worthless pieces of paper.

This is a beautiful uncut sheet of four notes from the Citizens' Bank of Louisiana at New Orleans. The black and white sheet has two $1 notes, one $2 note and one $3 note. The back of this sheet is blank. $1 notes feature sailing ships in the center, a sailor at left (some attribute to Christopher Columbus), and President Millard Fillmore at right. The $2 note features President Fillmore at left, maiden at the docks in center, and a vignette known as Looking Out at the right. The $3 note features at center, three buckskin clad hunters, two watching while their partner attempts to coax a flame from a newly lit fire. A freshly killed deer is tied across the back of a white horse. Two dogs complete the scene. A vignette in the lower left corner depicts a lovely maiden seated by the shore, possible meant to represent Commerce. The lower right corner features a shipbuilder splitting a piece of lumber (the framework of a ship can be seen in the background).

Printed by the American Bank Note Company, the premier printing company in the U.S. at that time. Call for availability and pricing. Click on the image to see a larger representation of the bond.
Broken Bank Note - Canal & Banking Co., New Orleans - $20 Notes, 1/2 Sheet

The Free Banking Era (1837-1862) followed the demise of the First and Second Banks of the United States, marking a quarter century in which American banking was a hodgepodge of state-chartered banks without federal regulation. Seeing both an opportunity for profit and a means of addressing a need for a portable medium for exchange, many banks began printing currency. In some cases the banks backed their currency with some form of subscribership or hard assets, but this was not the path followed by all banks. Almost every bank eventually issued more bank notes than they could back with assets; and when a currency panic ensued, the banks were unable to redeem their notes and had to suspend specie (coin) payment, usually resulting in the bank going out of business. By 1860, an estimated 8,000 different state banks were circulating worthless currency called "wildcat" or "broken" bank notes, so called because many of these banks were located in remote regions and frequently failed or "went broke." The era ended in 1863 with the passage of the National Bank Act. The currency shown above is a half-sheet of unissued notes from the Canal & Banking Company in New Orleans, Louisiana.
Click on the image to see a larger representation of the banknote.
"Dix Note" - $10 Citizens' Bank of Louisiana - $750.00

An obsolete banknote from the Citizens' Bank of Louisiana in New Orleans. Red border and underprint with an image of the USS Adriatic on rough seas in the center; and at the lower left the portrait of Louisiana Governor Andre Bienvenu Roman, who served from 1831-35 and 1839-43.  The reverse is red with "DIX" (the French word for ten) in the middle.

Legend has it this note gave the South its name "Dixieland". The Citizens' Bank was a major banking institution in the South. As one of the most stable antebellum banks, its currency was widely accepted and distributed along the Mississippi.  Traders from “up-river” would float their wares down the Mississippi River to New Orleans and return home with their pockets full of  “Dixies,” as they called the notes. Soon all the land south of the Ohio River would be referred to as "Dixieland" or "Dixie."

Click on the image to see a larger representation of the bond. Note: The items sold may not be the exact one as pictured.
U.S.  and Foreign Currency
Giori Test Note Sheet 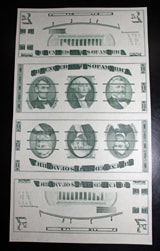 At the conclusion of WWII, Gualtiero Giori created what was eventually known as the Giori Press. This groundbreaking method allowed two-color and even three-color engraving from a single plate, in one pass. In the 1970s, to help improve the Bureau of Engraving and Printing’s printing process and modernize the machinery, the BEP contracted with the American Bank Note Company to design a press. They, in turn, subcontracted the work to the American Can Company. The company chose the Geneva, New York, plant as the site for building the press and Edgar L. Pigman was selected as the engineer to work on the project.

Mr. Pigman designed the presses and tested them using the Giori process. The plates displayed approximately 32 different vignettes, including portraits of Presidents Washington, Lincoln and Grant that are identical to those on the $1, $5 and $50 Federal Reserve Notes that were then current in circulation. While the presses worked fine in Geneva (making these test notes), and were delivered to Washington, D.C., they were never used for making any currency that went into circulation.

Originally considered by the BEP as illegal for collectors to own since they somewhat resembled authentic circulating currency, the restriction on private ownership has since been lifted. Click on the image to see a larger representation of the bond.
Giori Test Note - Singles

Giori Test Note Single with vignettes of Presidents Abraham Lincoln, George Washington, and Ulysses S. Grant.
Opposite side of note is blank.

Giori Test Note Single with reverse designs of $1 and $5 Federal Reserve Notes.
Opposite side of note is blank.
Click on the images to see larger representations of the notes.
COPE Experimental Note

The acronym COPE stands for Currency Overprinting Processing Equipment. COPE presses have been specifically designed for the Bureau of Engraving and Printing (BEP), and they utilize the letter press printing process.  This is the third and final type of printing utilized by BEP for paper currency. This press takes a 16-subject sheet of currency and adds the two serial numbers, the black universal Federal Reserve seal, the green Department of the Treasury seal, and the corresponding Federal Reserve identification numbers.

These experimental notes were printed in the early 1970s to test the BEP's new overprinting equipment. The note is the same size as small paper money and features two serial numbers in a gray tint. The serial numbers are both A82432919A. There is no printing on the back. The note is authenticated and graded by PCGS as Gem New 66PPQ. Click on the image to see a larger representation of the note.
1793 French Currency (Assignat) - $19.95 each 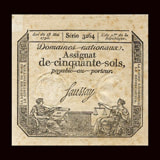 An assignat was paper money issued by the National Assembly in France during the French Revolution. They were issued after the confiscation of church properties in 1790. The government was bankrupt and thought that the financial problems could be solved by printing certificates representing the value of church properties. Originally meant as bonds, they evolved into currency used as legal tender. Assignats were used to retire a significant portion of the national debt since they were accepted as legitimate payment by domestic and international creditors. However, since there was no control over the amount to be printed, massive hyperinflation resulted. Instead of solving the financial problems, the assignats became a catalyst for food riots. Instability continued after the abolition of the monarchy, intensified by the wars France faced. In early 1792, they had lost most of their nominal value.

These assignats are approximately 3.25" x 3". Dated "Loi Du 23. Mai 1793". Series 3264. One-sided, printed in black "de cinquante sols - payable au porteur" (50 sols - payable to bearer). Authorizing signature of "Laussay" also printed in black. Features at bottom a vignette of two seated figures holding the scales of justice and a tablet of the "Droits De L'Homme" (Rights of Man). Designed with punched through embossing and a watermark to prevent counterfeiting. Beautiful piece of French currency from the year in which King Louis XVI and his wife Marie Antoinette were executed by guillotine.

Click on the image to see a larger representation of the bond. Note: The items sold may not be the exact one as pictured.