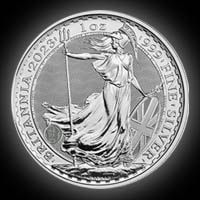 The 2023 silver Britannia coins feature the same reverse as in previous years. The reverse carries the Philip Nathan design of Britannia, with a trident in her right hand and the Union Jack shield at her side as she gazes out toward the horizon.

The obverse depicts the traditional portrait of Queen Elizabeth II by the Royal Mint's Jody Clark. A new coin is being minted with the obverse featuring King Charles III, designed by British sculptor Martin Jennings, the first bullion coins to depict the new king.  Call for availability and pricing.
2023 One-Ounce Silver Krugerrands 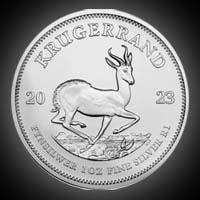 This is the 6th year that the silver Krugerrand has been issued. The first issue in 2017 commemorated the 50th anniversary of the issuance of the Krugerrand by the South African Mint and Rand Refinery, and also included platinum coins in addition to gold ones. The silver coins were so popular that in 2018 the coins debuted as an annual release of the silver  bullion product.

The obverse features the image of Paul Kruger, nicknamed Oom Paul (Uncle Paul), who was an influential Boer figure in the late 19th century in military and political affairs of the new South African republic. He was president of the South African republic from 1883-1900, He was so influential that his name was added to the national currency, the Rand, when the gold Krugerrand was introduced in 1967. Also on the obverse are the words South Africa in English and Afrikaans. The reverse is an image of the Springbok antelope, the national symbol of the Republic of South Africa, along with the year of issue, KRUGERRAND, FYNSILWER, 1 OZ. FINE SILVER, and R1 (one Rand, the denomination). Call for availability and pricing.
2023 One-Ounce Silver Elephant from Somalia 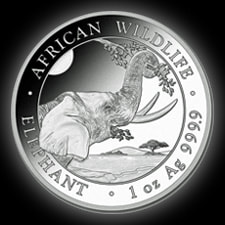 The Federal Republic of Somalia is located on the eastern coast in the “horn” of Africa and borders the Gulf of Aden, the Indian Ocean, Ethiopia and Kenya.The country was formed on July 1, 1960, through the union of newly independent territories British Somaliland and Italian Somalila.

The first silver elephant coins were first issued in 1999 by Zambia until 2004, when the country of issue changed to Somalia. The Somalia Elephant coin is one ounce of .9999 fine silver and carries a face value of 100 Schillings – Somalia's unit of currency. The coins are minted in Germany by the Bavarian State Mint (Bayerische Hauptmünzamt), and are part of the African Wildlife Series.

The obverse of the 2023 Silver Somalian Elephant features a rendition of the coat of arms of Somalia, a horizontally striped shield bearing a single star, supported by two wild leopards facing each other, standing on two spears that are wrapped with a ribbon. Two crossed palm fronds also appear below this emblem. The words Somali Republic appear in English at the top of the coin; the date is broken into two parts and appears on each side of the main design. The legal tender value of the coin, 100 Shillings, appears at the bottom. The reverse, which changes every year,  features an African Bush elephant, facing right, using its trunk to pull down a tree branch as it dines on the tree's foliage. The words African Wildlife and Elephant also appear on the reverse, along with the weight and purity. Call for availability and pricing.
Russian 5 Kopeks - Late 18th Century Dates - $24.95 each
These coins were minted during the reign of Catherine II (the Great), who was Empress of Russia from 1762 to 1796. Catherine was considered one of the most powerful women in the world during her reign and was renowned for her vast expansion of Russian territory and the great modernization of Russian society.

Born Sophie Friederike Auguste von Anhalt-Zerbst-Dornburg in 1729, a German-speaking Prussian princess, Catherine assumed the throne upon the death of her husband, Tsar Peter III, of the Romanov family, under mysterious circumstances. She played a quiet but vital role in the American Revolution, which she predicted would succeed as early as 1776. “The colonies,” she wrote to a friend, “have told England goodbye forever.” Catherine detested the England of King George III, and rebuffed numerous requests by England to help put down the Revolution, either by sending troops or funds.

The obverse features a crowned monogram ET (Ekaterina Tsarina) in ornate lettering that divides the date, surrounded by a wreath. The reverse features the Romanov crest, a two-headed eagle facing in opposite directions, with crowns above. On the double eagle's breast, a coronation chain surrounds an inset of the legendary St. George slaying the dragon. Cyrillic script is underneath.

The 5 Kopek is the largest copper coin ever used in regular circulation. Weighing on average 51 grams, they are almost twice as heavy as U.S. silver dollars of the same period. One Kopek was equivalent to a U.S. penny, and the Kopek was unit of currency in Russia for 479 years before it was discontinued in 2013.